Smartphone Operating Systems: How Android became King of the Jungle

Long before the likes of iOS, Windows, and Android became the main players in the mobile OS scene, there was Symbian. It was the first ever modern operating system for smartphones and together with other little-known OS platforms, helped to transform the smartphone industry and was the first platform Inceva published as one of the earliest mobile app developers in Bangkok.

Fast forward a decade after Symbian’s initial release, the smartphone OS field is tightly controlled by Google’s Android and Apple’s iOS mobile platforms. Android has maintained the largest share of the market for years, currently standing at just over 87% of the market. iOS-powered devices currently take up 11.7% of the market, Windows 0.4%, and other OS platforms take up the remaining 0.3% by the end of the second quarter of 2016 according to data by IDC Research. 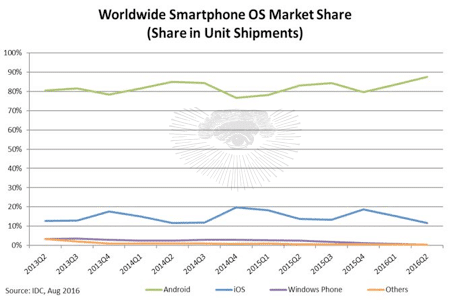 The number of Android-powered smartphones has been on the rise over the past number of years, which signifies Android’s growing popularity among manufacturers, app developers and end-users.

So where does the Android platform draw its momentum even in the face of robust software architecture by Apple and Microsoft? Lets take a look below.

The fact that Google decided to cede control and copyright to a huge chunk of Android code means developers and manufacturers are able to customize the OS for a large number of devices. Programmers were able to develop a wide variety of applications for consumers, which saw millions of applications populate the Play Store in just a few years. A large number of programmers working on Android helped to grow the system in terms of new ideas, which saw it become the OS of choice for most smartphone manufacturers.

Android has been free ever since Google launched it back in the late 2000s. This has enabled manufacturers to produce a wide range of devices based on price and features. Android-powered devices are popular within the lower-end, budget smartphone segment of the market where users often look for decent devices at a fair price.

But the same OS also powers a number of high-end devices, many of which can comfortably compete with the likes of the more expensive iPhone. iOS, which is the second-most popular mobile OS, is often found on exclusively high-end devices in areas where potential buyers usually have a high disposable income.

Since Google made Android free and open source, manufacturers have the freedom to customize their devices around the Android platform. Unlike iOS which is tied to a single device manufacturer, Apple, Android can be used by any smartphone manufacturer around the world.

Manufacturers can freely customize the Android platform by making the necessary modifications to enhance user experience and drive the growth of the smartphone market.

Manufacturers actually play a key role in the growth of Android as a mobile OS platform. While Google maintains a certain “oversight” role in the creation and distribution of the Android OS, the development of the platform can be largely attributed to the Open Handset Alliance (OHA). OHA is an association of manufacturers that influences the production of Android and includes brands such as Sony, Google, HTC, Samsung, and Intel. This association with hardware manufacturers has played a big role in propagating Android as the most popular OS on mobile devices.

One of the major reasons why Android is the leader in the field is because of its richly diverse app collections on the Google Play Store. Because Android is freely available and an open source platform, programmers are free to develop a wide variety of apps that seem to get better every other day. Google also provides a fully-featured development platform that includes tools and a large developer community for support during development and for mobile app marketing.

Google’s Android marketplace also allows developers to distribute and update their apps on the platform, which exposes these apps to millions of users on the platform. Additionally, since Android adapts to each device where it has been installed, it lets us customize the appearance of the user interface on each device the application is installed.

The world would be a much different place without Android. There wouldn’t be as many applications and smartphones in the market, with customers only getting to choose between BlackBerry, Apple, and Windows devices running proprietary operating systems for their devices.

The Android mobile OS has changed the way we experience technology and helped to boost global sales of smartphones. Android-powered smartphones and apps have become an integral part of business and personal use, with data projections showing increased growth going into the future. If you are looking for cross-platform mobile apps or web development services please contact us today.